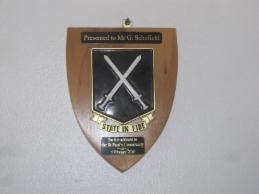 So, success; we all want success don’t we? No one wants to fail but the key to success is how you handle failure and what you do with that lesson.

After all, failure is just a temporary thing, unless you would like to make it permanent.

I hate to be the one to break the news to you but life does not go the way you planned it. Things will go wrong. Sometimes terribly wrong and worst of all you will have to suffer rejection and disappointment.

Even when you attain success you may find those long forgotten, distant relatives will appear and importantly, you will have to endure envy. So success has to come within the strength of your inner self.

That is part of what this great school develops and bestows on you (if you are willing to accept it), and education, so that you are a match for anyone, anywhere in any strata of society. That is what education frees you to do and, make no mistake, this education is excellent but you don’t want to hear philosophical talk from me you want practical things, so here are our advantages.

I can give you a long list of disadvantages but I am not going to. There will always be somebody to tell you what you can not do. I’m not one of them, and the list doesn’t matter if you use these advantages:

They love the way we talk in the US, and in Britain our accent doesn’t fit into their rigid class system. We also have our own idiom, our own colorful turns of phrase and educated, picturesque vocabulary. Use them.

We will get an extra 2 minutes before they throw us out just to listen to our accent.
Spend that time convincing them you are the person they want and to listen to your ideas. Success is about having access. Don’t think “oh no that assistant or secretary is standing in the way (because they do that) of my talking to some important person”. Realize the truth: here is someone with whom I can share my ideas. Convince them, the assistant. They have the key to your future.

2/ we were brought up knowing perfectly well we are as good as anyone and can talk to anyone. That is a huge advantage in a world filled with glass ceilings and knowing your place. We are delusional but it is what you believe that matters.

3/ we are flexible and innovative. You need to be, internationally. You have to learn their ways and you will suddenly see yourself.
I had many a friend with NATO and diplomats in Washington DC, who would maintain their modest calm in the cacophony of American power.

Americans don’t have time even to breathe they are consumed by the moment and their work load. Do the maths. That approach will get you 100 times underappreciated.

You have to be flexible and in so seeing your difference you make yourself aware of the opportunities when they happen.

Don’t lie, I hate to say it but lying is very popular.
In the Kingdom of the blind the one eyed woman is Queen. If you alone can be trusted you will have everything, not the least your self respect and I know what you are thinking “I don’t lie. A white lie or little fib here and there never hurt” It hurts YOU. If you say I will call you back you mean it and do it.

Get into a habit of telling the truth and your words meaning something.

Once lying is acceptable it is only a matter of degree how untrustworthy you can be.

That’s like the noise in the class room. In the US they allow quiet, reasonable talking What??? American students are just like you but with a few less rules.

Not in my class.

I had the pleasure of teaching in US high schools and designed a course in media literacy for Carl Sandburg Middle School. Civilization is only one step from complete chaos, remember that. Talking is unfair to your fellow students who want to learn even if there is only 1 of those.

Now the US is the opposite to what you think. You think: American cities dwellers with their massive skyscrapers while the rugged Australians are in the outback but in fact the US is the most rural and, Australia the most urban of countries.

Remember those Westerns; like Bonanza, where the good hearted townsfolk sometimes are riled and armed and with their own sense of justice. I used to think that was movie and artistic license but there is a real element of that even today. The Wild West of legend was in part a direct result of the Civil War; a fracturing of society with bands of militia within an armed population and concealed weapons in houses throughout the South from a war that pitted brother against brother.

4/this school trains you to be punctual.
Be early to your appointments. That allows an opportunity for something to happen that you did not expect. That is how I met President Clinton even before he was president. I was waiting early for a meeting and he showed up.

In Washington DC social events shape the landscape of power. You are not there solely to have a good time you have a mission and a set of goals. You already have them in your mind: the best person to speak with, how you set the conversation so that when the opportunity appears, you take it. It costs 10,000 dollars for a small table at some of these events. I have a free seat at the table because my painting is the Patriot Award for Members of Congress.

There is always a way around everything.

Because of international financial folly the World is broke and the NZ government is trying to be prudent but has eliminated the education position at the Embassy in Washington, DC. Short term we can save some money but we can not compete in the other international arenas: Military spending, corporate wealth, projection of our international power. We are small. Trade is the important one and our education models like this school are sought after. We have a liaison to US lawmakers with our education systems and innovative ideas.

It makes us international friends.

Who your friends are is important. They define you. That’s why I said here in 2008 always have friends who are smarter than you. It was a joke but there is truth in humor. I have made life long friends here and your parents have sacrificed to send you here knowing the caliber of friends you will make. You need allies but your friends have to inspire you and you them. You learn from each other so be loyal.

5/ Dreams; you have to have dreams to succeed. We are the descendants of dreamers of pioneers and adventurers. My ancestors were the early settlers to NZ with the Stewarts in the North at the Bay of Islands and the Schofields in Christchurch.

Finally I have to mention luck.

Napoleon always asked if his generals were lucky before he chose them. He believed in luck. Perhaps he thought you make your own but don’t follow Napoleon too closely he lost 3 million of his own troops. He receives a lot of good press in history a lot of it he wrote. People say how lucky I am. When I was at the Pentagon I was whisked off to the US Secretary of Defense’s office and commissioned to paint their most important diplomatic work. What about the countless times I was in the right place and nothing happened. People say “look at that talent in successful Rugby players”. They are really looking at a lot of hard work, training, determination and belief in yourself.

How you take rejection and defeat is the theme for success. It is something that is learnt and it is the same for everyone.

In your courting days you may be overwhelmingly rejected by the opposite sex but you only really need one to be a complete success.

In sport I was the captain of my proud rugby team, right here, and we were the worst case of inept players and miscreants at the school; the Barbarians. But every Saturday we went out on to that field and fought to a noble death.

And guess what…one day we won against a good team. And that is the same for international success you only need one success, one break to open the door in a world where there is only a hairs breadth between; success and failure.

Some say “you must be patient”. Forget being patient YOU MUST BE PERSISTANT